Fortnite: Battle Royale – A game mode that puts 100 players against each other on a large island. These players parachute out of a floating “battle bus” and land somewhere on the map. Players must kill each other with weapons found throughout the game and can build fortresses with the material they collect by using their axe to break down objects. They fight other players while constantly moving towards a randomized safe zone that protects players from the growing “storm.” The circular safe zone gets smaller as time progresses. Last person standing is the winner.

Well, it is. But it is also a game that has become insanely popular within months. If you want to learn the details of the game, check out this link here. There is definitely a lot more to learn between weapons, outfits, understanding the battle pass, and the constant updates that this game is providing to its players.

Here at Escape Room Pittsburgh, we love Fortnite Battle Royale. We love it so much we made a tournament for it. 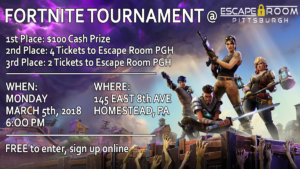 We had four monitors, four Xbox Ones (Sorry, PS4 and PC players!), and four Xbox Live accounts set up in our lobby on March 5th. The tournament was BYOH (bring your own headset). We had a 30 person sign up sheet and had everyone start at 6 PM. Every player would play solo and would move forward in the bracket system if they ranked higher than their opponent. However, we did do double loss elimination, so you still had a chance even if you lost that first round.

When we initially created the tournament, we thought ranking would be enough to choose a winner to move forward. Man, were we wrong. We had some amazing players come out that day and had #1 Victory Royale’s popping up left and right on each screen! (For those of you who didn’t know, Victory Royale is the message that comes up when you win as the last man standing). In these cases, we had to choose the winner to be whoever had the most kills – which there were a lot of! Overall, we learned that 30 players playing a double loss elimination can certainly take awhile. Why? Well, when you have great talent like the players that signed up – players will make it in the top 10 almost every time.

Thank you to everyone who came out, we will be working on refining this tournament idea and hosting another one in the future! If you have any suggestions on adjustments to our tournament, other games you would like to play, or anything else – please let us know. We are certainly looking forward to hosting another game night soon!

Shoutout to the winners of the March 2018 Fortnite tournament: